Blaen Bran Community Woodland is made up of two areas :

Blaen Bran farm was built into the mountainside and probably looked much like many of the other mountain farms of that time. I’m sure many generations of families lived there scraping a living from their animals grazing on the mountain pasture.

The importance of this farm is in its name – Blaen Bran, right by the source of the Bran brook which runs down this small valley in to Afon Llwyd river. The valley became known as Cwmbran, hence the name of our town.

All that remains of the farm is a few stone walls, some old beech trees which probably grew in hedgerows and part of one wall of the farm house.

A map from many years back is shown here and was obtained from the council archives. You can click on it to see a readable version! 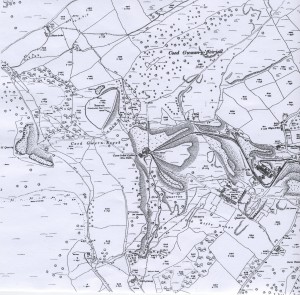 Now Wales is the land of myth and legend, so why should we not have our very own legend here in Upper Cwmbran.

I had an interesting translation of the Welsh – Gwaun–y–Fferiad this week. It translates to ‘Priest’s Moor’ and legend has it that a priest lived here in the middle ages. He fell out with Queen Elizabeth and was hanged on the moor. It is recorded in history books that Elizabeth, the daughter of Richard 3rd was given Caerleon and its surrounding lands in the mid 1480’s. She later became Queen Elizabeth when she married King Henry 7th, the first Tudor King.

The reason for this falling out is not known but it could have been that the priest criticised her father King Richard for his many bad deeds – he was not a popular king and some believe he came to the throne by deception and had the two princes, rightful heirs, killed in the Tower of London.

But whatever the truth the story remains that he was hanged here on the moor. Now we don’t have any recordings that the moor is haunted but when I was younger I heard several stories of people hearing footsteps and when they turned to look there was no one there.

The moor land area was probably the place where the industrial heritage of Cwmbran began. In the mid eighteenth century coal from Gwaun-y-Fferiad was being sold to the tin works in Caerleon. Signs of these early workings can be seen in the woodland and will, we hope, form part of future educational trails.

The history that is most important to us is our memory of a place where trees grew over the footpath to form a tunnel, where you could walk in peace and quiet, hear birds sing and occasional glimpse views over the valley and indeed over the Severn estuary to the Somerset coast.

Each change of use of the area has caused some destruction of its interesting past. Our aim is to retain what we have and ensure that any changes we make will be sympathetic to the historic importance of the area.